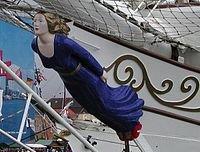 Akroploro in Greek, means figurehead (object).  The metaphore derives from the carved figurehead at the prow of a sailing ship  A figurehead is a carved wooden decoration found at the prow of ships largely made between the 16th and the 20th centuries. It had the protective function of warding off evil spirits on Viking ships.  For the Ancient Greeks it symbolised acute vision and ferocity,  while in Roman boats represented valour in battle.  In Northern Europe the swan was used representing grace and mobility. The purpose of the figurehead was often to indicate the name of the ship in a non literate society ( albeit in a sometimes very convoluted manner ).

Our location, being on the edge of the northern  rock of Pelekouda, inspired us to name it Akroploro.